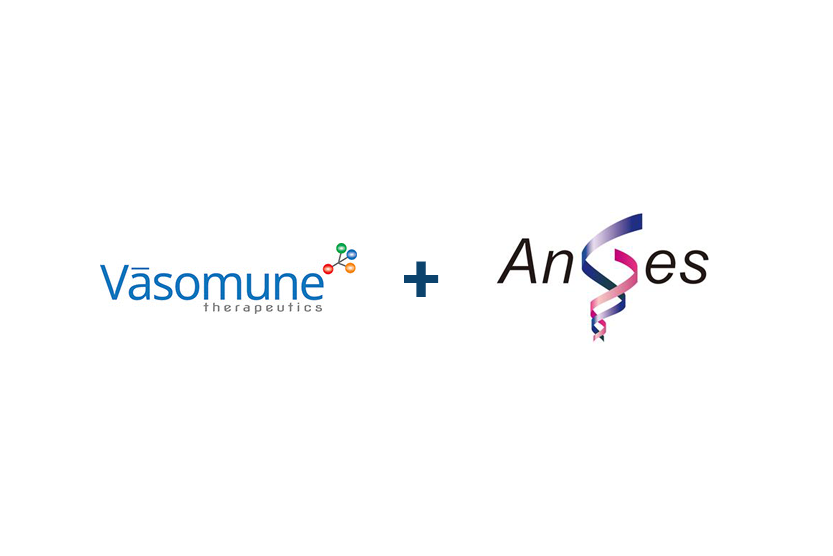 The collaboration is designed to advance Vasomune’s peptide-based Tie2 receptor agonist program, initially for the treatment of critical care indications, including Acute Respiratory Distress Syndrome (“ARDS”), into clinical development.  ARDS is a critical care indication with a significant unmet medical need as there are currently no approved therapeutics. The parties expect to initiate clinical trials in 2020. With such a foundational mechanism involved in multiple disease states, the parties have the option to co-develop the compounds for additional indications associated with vascular dysfunction and leakage.  These indications include asthma, atopic dermatitis, glaucoma and vascular complications of diabetes.

“Vasomune is enthusiastic to combine our technology, scientific and preclinical expertise with the significant development capabilities and track record of our colleagues at AnGes through this unique partnership structure to maximize the opportunity for a Tie2 receptor agonist to benefit patients.”, stated Parimal Nathwani, President and CEO of Vasomune Therapeutics. “AnGes’ commitment to developing truly novel biotherapeutic medicines directly aligns with Vasomune’s objectives.”

Under the terms of the agreement, AnGes will provide Vasomune with multi-million dollar co-development contributions including upfront and clinical milestone fees.  The initial objective of the partnership is to achieve human proof of concept in ARDS, which alone is potentially a US$2.5 billion market opportunity worldwide.  The partnership provides the option for continued co-development through to commercialization including expansion to other indications.  The parties will share equally in all expenses and all proceeds including milestone and royalty payments from any third-party licensing transaction. Development and commercialization of the program will be managed through Joint Committees organized by the two companies.  Shadow Lake Group Inc. advised Vasomune on the transaction.

Ei Yamada, President and CEO, AnGes, stated, “We are truly impressed by the quality of the research derived from Sunnybrook Research Institute and the unique partnership with MaRS Innovation that has created and advanced Vasomune Therapeutics. This program represents a significant commitment by AnGes to advance and develop truly innovative biotherapeutics towards commercialization for the benefit of patients.”

“We are honoured to have AnGes validate the strength and translatability of Vasomune’s science led by Dr. Paul Van Slyke, Chief Scientific Officer and co-inventor”, says Rafi Hofstein, President and CEO of MaRS Innovation.  “This unique partnership has attracted foreign capital and expertise to allow Vasomune, a Canadian born company to grow and scale in Canada and maintain the legacy of the late Dr. Daniel Dumont.”

Acute Respiratory Distress Syndrome (ARDS) is a serious medical condition occurring in critically ill or injured patients characterized by widespread inflammation in the lungs.  One of the leading pathophysiologies of ARDS is leakage of fluid from the capillaries in the lungs into the alveoli where blood is oxygenated.  The fluid keeps the lungs from filling with enough air resulting in less oxygen reaching the bloodstream. Oxygen deprivation can lead to organ failure and death.  It is well documented that 10 percent of all Intensive Care Unit admissions are for ARDS and the mortality rate for such patients is 40 percent.  There are currently no approved pharmacological treatments for ARDS. In the United States, in excess of 300,000 cases of ARDS are reported per year.  The global market for ARDS is expected to exceed $2.5 Billion U.S. dollars annually.

AnGes is a biopharmaceutical company focused on the development and commercialization of gene-based medicines including gene therapy and oligonucleotide medicines. The company’s lead product candidate is HGF gene therapy for critical limb ischemia (CLI), for which the application for marketing approval is currently under review by the Japanese authority. AnGes also develops NF-kB Decoy Oligo for low back pain. The company is located in Tokyo, Japan and listed on Mothers of Tokyo Stock Exchange, a market for emerging companies.

Vasomune Therapeutics is a private biotechnology company based in Toronto, Canada developing therapies to target diseases associated with blood vessel (vascular) dysfunction and destabilization. Vascular dysfunction can lead to, or exacerbate, many different diseases such as cardiovascular, renal, pulmonary and oncology. The company’s lead compound is a Tie2 receptor agonist that has demonstrated positive therapeutic effect in many different diseases associated with vascular dysfunction.  Vasomune Therapeutics is based on research from Sunnybrook Research Institute and was spun out in collaboration with MaRS Innovation with both Sunnybrook Research Institute and MaRS Innovation as founding investors.

Vasomune Therapeutics is a private biotechnology company developing the next generation of medications to harness the body’s ability to defend against illness by modifying cellular response to disease.